read the article at perezhilton.com

“One Woman Army” is co-written by 2101 Songs writer Teddy Sky.

get your copy of “One Woman Army” on iTunes now

read more about Chawki’s “Time of Our Lives” at metronews.fr 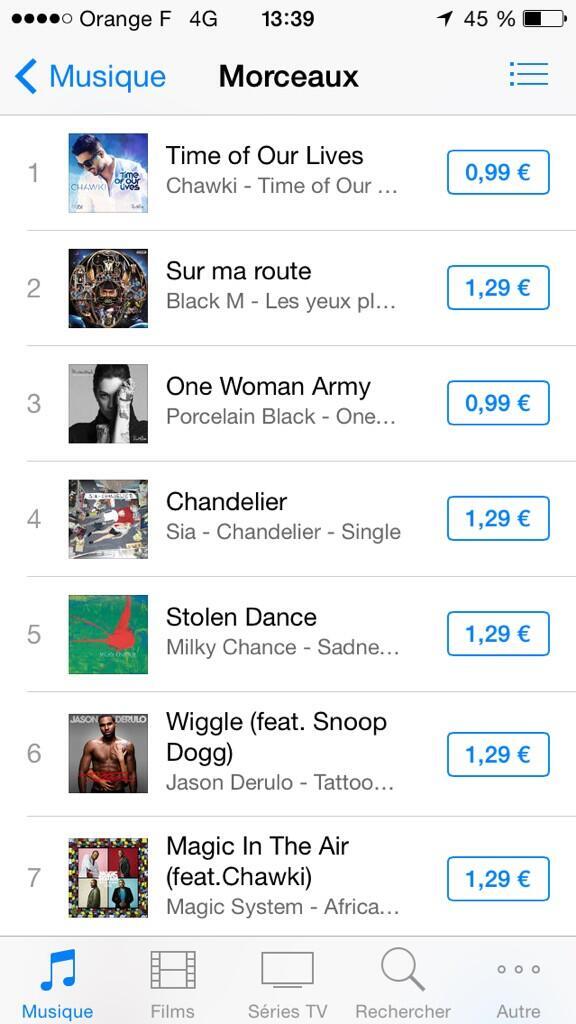 Amidst the World Cup madness that’s swept even America, it’s easy to forget that for the 47 months between the mega-tournament most of the globe is about just as excited about soccer as we all are right now. Moroccan-Swedish producer, songwriter and music executive RedOne — born Nadir Khayat — is one of those true football fans, and it’s paying off now with a handful of inspired stadium-shaking hits to his credit.

Though it’s too soon to say whether Khayat — whose career launched working with Lady Gaga early on with “Just Dance” and “Poker Face,” among others — has the next “Olé, Olé, Olé,” on his hands, he is making an impression beyond the standard music circles: In May, just 12 hours after his favorite football club Real Madrid’s Champion League cup victory, his new team anthem “Hala Madrid …y nada más” sung by a chorus of players shot to top iTunes charts in Spain and 17 other countries across the globe; just in time for the World Cup, his song “Time of Our Lives” was declared the official song for Al Jazeera’s global beIN Sports Network; and, naturally, he was also pegged as a co-writer on the Pitbull, Jennifer Lopez and Claudia Leitte-performed World Cup anthem “We Are One (Ole Ola).”

Billboard caught up with Khayat to talk football and what fans want in a new anthem. And even though he refused to choose a team to win the World Cup — playing diplomat, saying he has too many friends on too many teams to play favorites — he was ready to talk about exciting 140,000 fans with a song and his new role in the game.

What’s the story behind the Real Madrid anthem, what’s your connection to that club?

I’ve been a soccer fan since I was a kid, and Real Madrid is the No. 1 team in the world. Like, No. 1 sports team — not even soccer team, but sports team — in the world; a No. 1 brand. As a kid, I didn’t know they were No. 1 or anything, but I was just loving Real Madrid. It was my dream to one day, hopefully, if I made it in the music business, to do something with Real Madrid.

You actually had that thought? That you might be able to work on music with the team someday?

Oh my god, yeah! Actually I play soccer really well, and when I was a kid I was dreaming to play for Real Madrid one day, you know? So first it was like I wish I could play with Real Madrid. And then, when I was really into just doing music, it became the second thing in my life, to do something with Real Madrid. It’s almost like I had to make it big to be on that level of Real Madrid so I could partner and do something with them. And then that’s exactly what happened.

I love soccer and the players love music, and you know Cristiano Ronaldo and Sergio Ramos they are fans of my music and always have been supportive, so we became very close friends. I had this idea for many, many years that I wanted to do the music, then I wrote the music one day when I was flying from Madrid — this was like four years ago — from Madrid to Morocco and I heard this music [in my head]. Its called “Hala Madrid …y nada más.” The title came later, but the song came to me a few years ago. First I just programmed it, then I recorded the symphony in Sweden, and then I just worked on the production.

You know I’m a musician, I’m not a beat-maker — I can do any kind of style — so for Real Madrid I did something more classic and symphonic but still has the memorable melody, which is always my signature.

That’s got to be key for making an anthem like this — the melody really has to carry it, because you want fans singing along right?

Exactly. I’ve always wanted to do something that the crowd would be chanting. And honestly we did it, I played it for the players and they loved it, we spoke to the president and he was obsessed with it. He said, “This song feels like it could give us a chance at the European Cup. We recorded it with the team, with Cristiano and everybody, and in every big game they would play the song and they won. [The President] told me, “The song has given us luck and it’s given us the strength, it’s emotional, it transmits something special to the players.” And what’s funny, before the game in the finals he told me several players were crying hearing the song. And it was amazing. They won the Champions League because of the song.

With this and the other soccer songs we’re talking about, how do you go about writing a “sports song”?

Well you know what, actually, I always have in mind the crowd. If you think about Gaga, you know, I’m just that guy who always likes the “Ohhhh” and “la, la, la, la, la,” all that people singing with the audience. I just love that. And of course with sports teams, it’s even more — crowds singing that’s something very simple, and everybody feels engaged. I love sports and I think when you capture that thing it doesn’t get stronger than that.

It’s music for the people. It’s for people who are emotionally engaged with something — to win, to share happiness, to just be as one. I mean, that’s what I love about it, it’s something that makes the whole stadium go like one, “We are for an idea, for a team, for a passion.” I definitely feel like it’s folk music where people get together and feel as one, with one idea in their mind, you know? When I heard this song at the stadium when [Real Madrid] won, and they did a huge party in the stadium, you see the whole stadium singing and the players and all of that, I started crying. I started crying because it’s too emotional. It’s crazy. It’s crazy because these people don’t know me, but we are one force. It’s very strong.

I can’t imagine. How many people are at one of these games?

That’s crazy, right? I mean, Gaga’s huge but how often is she performing your songs to 140,000 people?

So does all of this help you to somehow live your dream of being a soccer player?

For sure, for sure! Soccer is the sport that I’ve always loved. I love sports in general, but this is like I’m giving something to the sport that is emotionally involving other people with me. I’m not on the screen, and I’m not playing, but at least I’m giving something that helps the sport, you know, helps the emotional thing that’s happening that we’ve been living since I was a kid. It’s an honor to do it with the biggest team in the world. It’s amazing.

Posted in RedOne | Comments Off on RedOne: From Lady Gaga to Soccer’s Go-To Hit-Maker – with Love to Real Madrid (Q&A)
← Older posts